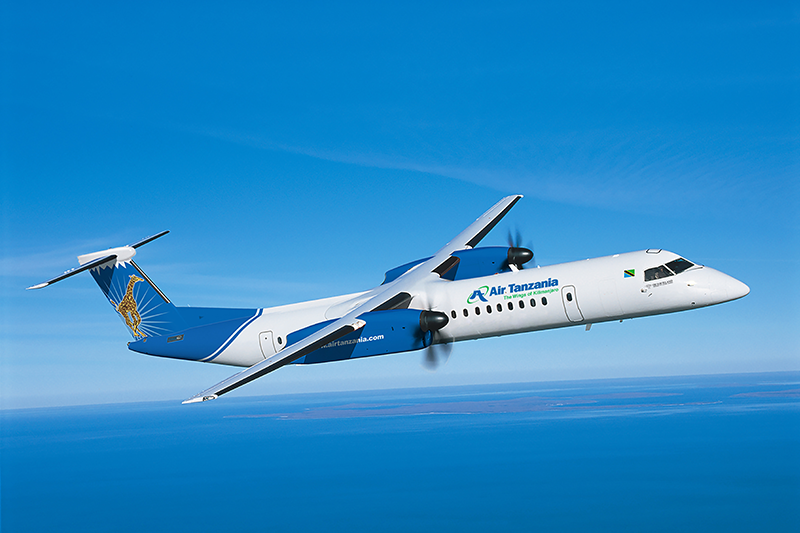 Dar es Salaam, Tanzania, October 19, 2019 – De Havilland Aircraft of Canada Limited (De Havilland Canada) announced today that the United Republic of Tanzania, represented by the Tanzanian Government Flight Agency (TGFA), has signed a firm purchase agreement for a Dash 8-400 aircraft. The aircraft, which will be leased to and operated by Air Tanzania (The Wings of Kilimanjaro), will join three that are already in service and another previously ordered one, to increase the airline’s fleet of Dash 8-400 aircraft to five. It will be delivered in a 78-seat, dual-lavatory configuration.

“Our current fleet of three Dash 8-400 aircraft is performing very well and offering excellent passenger amenities,” said Ladislaud Matindi, Chief Executive Officer, Air Tanzania. “We are very satisfied with the Dash 8-400 aircraft’s low operating costs and reliable operations in our high-utilization environment, and we look forward to the additional capacity that this new aircraft and another one that is scheduled for delivery soon, will provide. Air Tanzania continues to grow at a steady pace and we are opening new routes and offering more frequencies to meet the demand of our market. The after sales support that we have been receiving from De Havilland Canada has also been excellent and we are happy to reinforce our commitment to this aircraft as we count on more support from De Havilland Canada as our fleet, operations and route network continue to grow.”

“We are delighted to announce the United Republic of Tanzania as the signatory to our first purchase agreement following De Havilland Canada’s relaunch in June 2019,” said Todd Young, Chief Operating Officer, De Havilland Canada. “The Dash 8-400 aircraft is the world’s most advanced and most productive turboprop, and our announcement of this firm order, which will increase Air Tanzania’s fleet to five, signals the carrier’s confidence in the future of our aircraft program.

“Our customer base includes more than 65 owners and operators around the world, including over 15 new operators who joined in the last five years. The Dash 8-400 aircraft’s versatility has been demonstrated by the wide range of missions it successfully supports -- from diverse airline and charter operations, to specialized roles such as firefighting and cargo-combi. We expect that the aircraft’s unique capabilities, proven reliability and best-in-class environmental footprint will continue to generate sales globally and that we will build on our diversified customer base,” added Mr. Young.

With the Dash 8-400 aircraft being the only turboprop capable of seating up to 90 passengers, De Havilland Canada is seeing strong interest from existing and prospective customers in Africa and Asia; the company sees this continuing due to the close alignment of the aircraft’s attributes and the requirements of these growth markets. Additionally, because the aircraft provides turboprop economics with jet-like performance, De Havilland Canada is also targeting opportunities to re-invigorate demand from more mature markets such as North America and Europe where it is already well adapted as a regional jet replacement aircraft.