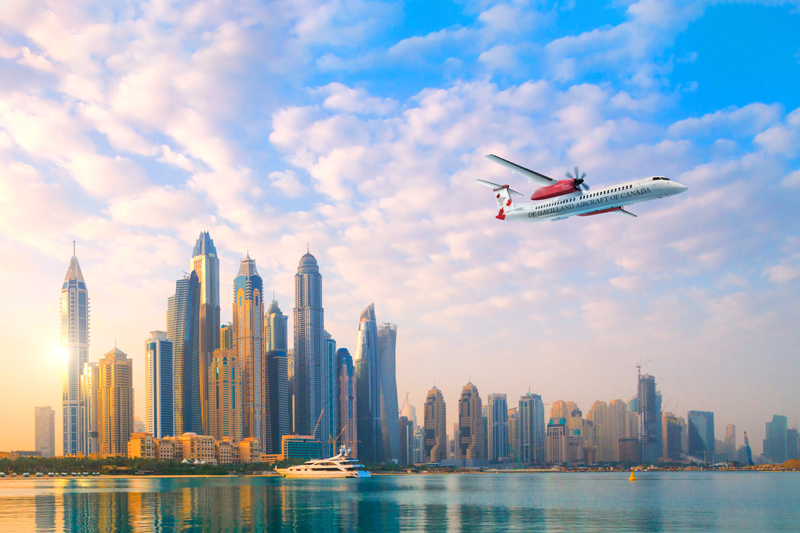 Dubai, November 20, 2019 – De Havilland Aircraft of Canada Limited (“De Havilland Canada”) today successfully concluded its activities for the 2019 Dubai Airshow. During the Airshow, the company announced commitments for up to 37 Dash 8-400 aircraft, the world’s most advanced and most productive turboprop, and also announced three agreements relating to its aftermarket services. De Havilland Canada also showcased a Dash 8-400 aircraft operated by Jambojet, a brand of Kenya Airways, and Kenya's first low-cost airline.

“We are especially pleased with our performance at this year’s Dubai Airshow since it is our first Airshow in the region since the relaunch of De Havilland Canada in June this year,” said Todd Young, Chief Operating Officer, De Havilland Canada. “Our teams have shown that they are working with our customers to secure the aircraft orders that will mutually drive our businesses forward. We have also demonstrated our commitment to enhance our aftermarket services network to ensure that our customers are benefitting from the highest level of support to maximize the efficiency of their fleets.”

De Havilland Canada also announced that it had signed a Memorandum of Understanding (MOU) with Palma Capital Limited (“Palma”) and Export Development Canada (EDC) that outlines mutual cooperation between the three parties regarding potential Dash 8-400 aircraft transactions such as aircraft procurement and leasing opportunities and sale-leaseback opportunities for the Middle East and Africa.

The company reaffirmed its commitment to operators in the region with the addition of two Authorized Service Facilities to its network. Known for its specialization in business aviation services, charter and aircraft management, Falcon Aviation Services (“Falcon”) is expanding its MRO portfolio to include base maintenance for the Dash 8-400 aircraft and will support operators of Dash 8-400 aircraft from its facilities in Abu Dhabi, United Arab Emirates, while Mediterranean Aviation Company Limited (“Medavia”), will offer heavy check maintenance services for all Dash 8 Series aircraft from its facilities located in Malta. Medavia and Falcon’s experience supporting the oil and gas industry and operating at remote airfields provides the first-hand knowledge that will be of great benefit to operators of Dash 8 aircraft in the region.

Falcon and De Havilland Canada also announced that the companies had signed a five-year extension to the Smart Parts program that provides component management solutions and support for Falcon’s fleet of three Dash 8-400 aircraft. The Falcon team confirmed that De Havilland Canada’s expertise and commitment to deliver the best solutions for the management of components allows the airline to focus attention on other business priorities.

Expliseat’s ultra-light TiSeat E2 for the Dash 8-400 aircraft was also demonstrated in De Havilland Canada’s Chalet during the Airshow. Depending on the configuration, the seats reduce in-flight weight by 300 to 1,000 lbs. and offer up to 1 per cent in fuel savings, while preserving passenger comfort.

With its acquisition of the Dash 8 aircraft program, Longview Aviation Capital has proudly relaunched De Havilland Canada, one of Canada’s most iconic brands. De Havilland Canada’s portfolio includes sales and production of the Dash 8-400 aircraft, one of the world’s most important commercial aircraft, as well as support for the worldwide fleet of Dash 8-100/200/300/400 aircraft. The company is committed to maintain the brand’s 90-year-old reputation for expertise, excellence and reliability in its manufacturing and commercial operations, and through its global network providing enhanced customer services and support. Increasingly, the company is focused on the cost competitiveness of aircraft across their lifespan.