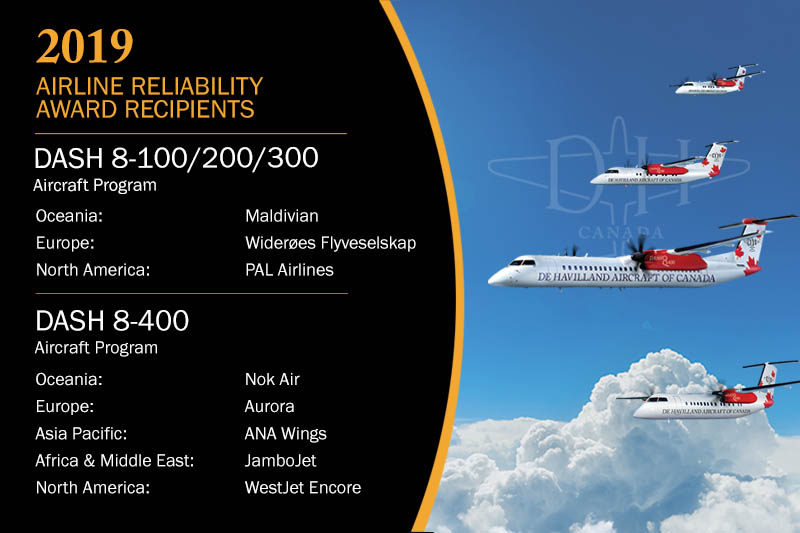 This year, as global communities cope with the impact of the COVID-19 pandemic, the recipient airlines were congratulated during virtual meetings with De Havilland Canada’s Chief Operating Officer, Todd Young and Vice President, Customer Services and Support, Amod Kelkar.

“Dash 8 Series aircraft continue to prove their reliability and operational flexibility in many of the world’s most challenging environments, and many of our operators have been using the aircraft to deliver essential goods and transport during the COVID-19 pandemic. The versatility of the Dash 8 Series turboprops is well known around the world and has become even more evident in the past few months as many airlines take advantage of the aircraft’s performance capabilities, fuel efficiency and low operational costs to restart flying in many communities around the world. Indeed, we are seeing our Dash 8 turboprops, particularly the Dash 8-400 turboprops that offer jet-like speed and performance, being used on quite a few routes that were previously served only by jet aircraft,” added Mr. Young.

The winners of the 2019 Airline Reliability Awards are listed in Appendix A.

With its acquisition of the Dash 8 aircraft program, Longview Aviation Capital has proudly relaunched De Havilland Canada, one of Canada’s most iconic brands. De Havilland Canada’s portfolio includes support to the worldwide fleet of Dash 8-100/200/300/400 aircraft, as well as production and sales of the Dash 8-400 aircraft. With its low carbon footprint and operating costs, industry-leading passenger experience and jet-like performance, the Dash 8-400 aircraft, which seats up to 90 passengers, is the environmentally responsible choice for operators seeking optimal performance on regional routes. https://dehavilland.com

Images relating to this release are available here

Winners of the 2019 Airline Reliability Awards