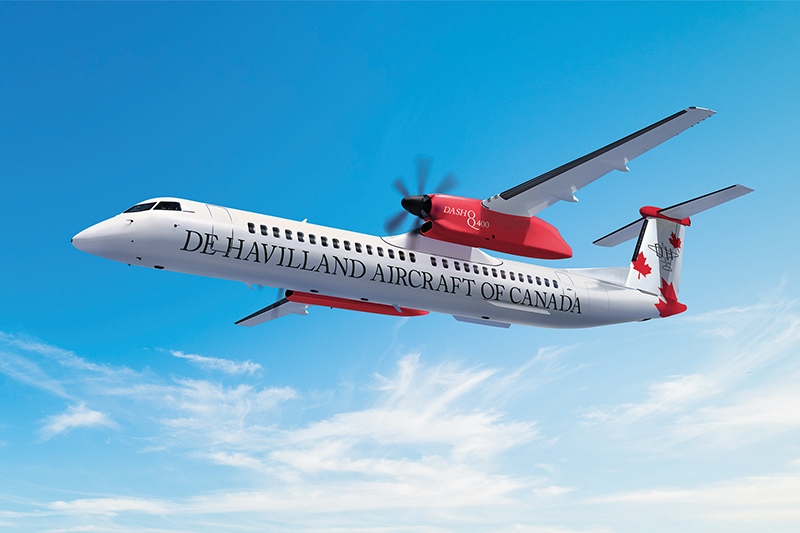 NASHVILLE, September 1, 2019 – De Havilland Aircraft of Canada Limited (De Havilland Canada) will have a robust presence at the Regional Airline Association (RAA) 44th Annual Convention, showcasing the superior economics and productivity of turboprop aircraft for commercial fleets. In particular, De Havilland Canada will feature the Dash 8-400 aircraft – the world’s most advanced and most productive turboprop. De Havilland Canada recently delivered the 600th Dash 8-400 produced at the company’s Toronto facility. The milestone delivery underscores the aircraft’s global reputation as a network builder for airlines, on the strength of its short take-off and landing capabilities and efficient regional operations.

With more seats, jet-like speed, and more cargo capacity, airlines flying the Dash 8-400 aircraft are able to generate more revenue per day. These attributes – which translate into superior economics – are further enhanced through Expliseat’s ultra-light TiSeat E2 seats, a cost-saving and comfortable option that reduces in-flight weight by between 300 and 1000 lbs. (depending on the configuration) and offers up to 1% in fuel savings. The TiSeat E2 will be demonstrated in De Havilland Canada’s booth at the Convention.

De Havilland Canada Chief Operating Officer Todd Young and Vice President Sales and Marketing Philippe Poutissou will host a briefing for media on Thursday, September 5th at 9:00 AM (local time) in room 105 AB of the Music City Center in Nashville, host venue for the Convention.

“With more than 350 aircraft currently in service with North American operators, the Dash 8 aircraft has been recognized as a strategically valuable part of fleets serving a spectrum of successful business models, including by many significant members of the RAA,” said Mr. Young. “At full 90-seat capacity, the Dash 8- 400 aircraft now fills a niche unmatched in the market, and we also have the ability to deliver aircraft in other configurations according to the needs of the customer. For example, the Dash 8-400 could offer a very compelling three-class, 50-seat configuration for regional aircraft operators seeking to serve scope-limited opportunities.”

Added Mr. Young: “There is a solid existing order book and we continue to aggressively market the aircraft and its variants while working with current operators to ensure the in-service worldwide fleet performs effectively. We are thrilled to again participate at this important RAA event, and look forward to sharing our ambitions for the continued development of the renowned Dash 8 aircraft program.”

This is the first year the Dash 8 program is presented at the RAA Convention under the De Havilland Canada banner, following the acquisition of the aircraft program by Longview Aviation Capital, and its re-launch as De Havilland Canada in June 2019.

De Havilland Canada is focused on the cost competitiveness of aircraft across their lifespan, from production to parts and in-service support. In addition to building on the market momentum of the launch of the 90-seat Dash 8-400 variant and the delivery of the 600th aircraft, the company is focused on enhancing customer service, including investing in inventory operations and supply chain processes.

De Havilland Canada will be at booth 222. The RAA Annual Convention runs September 4-7, 2019 at the Music City Convention Center in Nashville, Tennessee.