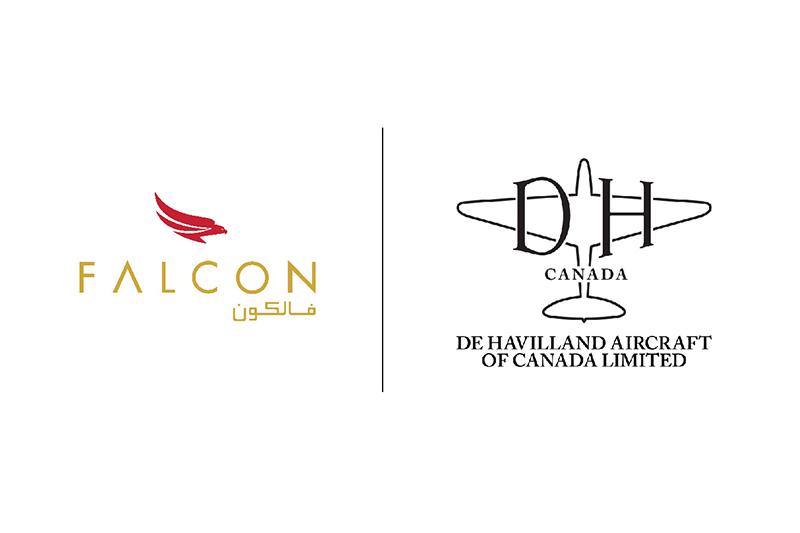 Dubai, November 16, 2019 – To coincide with the Dubai Airshow starting tomorrow, De Havilland Aircraft of Canada Limited (“De Havilland Canada”) announced today that it has entered an agreement with Falcon Aviation Services (“Falcon”) that will enhance support to operators of Dash 8-400 aircraft in the Middle East and Africa. Under the agreement, Falcon is appointed as a De Havilland Canada Authorized Service Facility (ASF) and will offer heavy check maintenance services from its facilities in Abu Dhabi, United Arab Emirates.

“The Dash 8-400 aircraft continues to be a valuable asset in our portfolio, and we are delighted to be appointed as an Authorized Service Facility for the aircraft which has proved its operational capability in the arid regions of North Africa, as well as in the humid, sub-Saharan regions,” said Capt. Ramandeep Oberoi, Chief Executive Officer, Falcon Aviation Services.

“Falcon has been actively involved in supporting the growth and development of the fleet of Dash 8-400 aircraft in the Middle East and Africa for several years, and now with this appointment as a De Havilland Canada Authorized Service Facility, Falcon is in an even better position to support the region’s aviation sector,” said Todd Young, Chief Operating Officer, De Havilland Canada. "We look forward to this ongoing collaboration with Falcon as we work together to contribute to the region’s growing air transportation network.”

Falcon Aviation Services is a leading business aviation services company based in Al Bateen Executive Airport, and Dubai (Al Maktoum International Airport) in the United Arab of Emirates. It was formed under the initiative of His Highness Dr. Sheikh Sultan Bin Khalifa Bin Zayed Al Nahyan, Advisor to the President of the United Arab Emirates.

Falcon Aviation has been established for over twelve years, during which time the company has built an unrivalled reputation for its VIP Charter and support to the Government’s Oil and Gas Sector. With a new and diversified fleet of luxurious corporate jets and helicopters, Falcon Aviation offers a multitude of Business and General Aviation Services including, Business Jet/VIP Helicopter Charter, Fixed Based Operations (FBO) Services, Aircraft Management and comprehensive MRO Support including Scheduled and Unscheduled Maintenance and Continuing Airworthiness Management Organization (CAMO). www.falconaviation.ae

With its acquisition of the Dash 8 aircraft program, Longview Aviation Capital has proudly relaunched De Havilland Canada, one of Canada’s most iconic brands. De Havilland Canada’s portfolio includes sales and production of the Dash 8-400 aircraft, one of the world’s most important commercial aircraft, as well as support for the worldwide fleet of Dash 8-100/200/300/400 aircraft. The company is committed to maintain the brand’s 90-year-old reputation for expertise, excellence and reliability in its manufacturing and commercial operations, and through its global network providing customer services and support. Increasingly, the company is focused on the cost competitiveness of aircraft across their lifespan. https://dehavilland.com

A media kit, including photos and images, is available at https://dehavilland.com