De Havilland Aircraft of Canada is greatly encouraged by the growth in the numbers of women now choosing careers in Aerospace. This year for International Women’s Day and Women of Aviation week, we would like to highlight some of the women who contribute to De Havilland Aircraft of Canada’s success through their highly developed Engineering skills.

Click on the image to learn more about De Havilland Aircraft of Canada’s Women of Aviation.

Hai Yen Tran came to Canada in 1981 as one of the refugees then known as Vietnamese boat people. She credits her father, an ex-naval commander, as one of her biggest influencers, and she remembers that he always told her “where there is a will, there is a way.”

Always curious about how things work, and what makes one material better than another, she graduated from McMaster University with a Bachelor of Engineering, specializing in Materials.

Hai Yen has 26 years of experience in her current field, and in her current position with De Havilland Canada, she loves being able to interact with various internal groups, customers, suppliers, aviation authorities, other aircraft manufacturers and interning students. She is interested in the green technologies that are making aircraft more environmentally friendly and notes that one of the fun parts of her job is that she gets to break and burn parts during her materials evaluation.

Hai Yen says that while it can still be challenging to break through the glass ceiling in engineering, it is no longer impossible. She enthusiastically encourages young women to pursue a career in aerospace as it presents rewarding opportunities and contributes to connecting people around the world.

When not at work, Hai Yen likes to raise funds for the fight against cancer and hike with her family. She volunteers as a mentor with Women in Aerospace Canada. 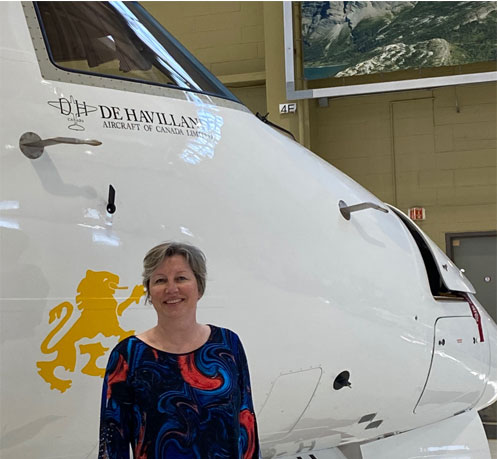 Deanna grew up in Germany and moved to Canada with her family when she was 14. Her mother was an engineer, and Deanna studied mechanical engineering in university as she enjoyed maths and science and thought it would lead to a wide variety of options upon graduation.

She has 25 years of experience in aerospace, starting out as a Methods Analyst and eventually moving into In-Service Engineering (ISE) Structures. Her current role involves designing structural repairs for aircraft damaged in the field and supporting operators during regular maintenance tasks. Deanna recently qualified as a Design Approval Designee (DAD) and can sign off on Repair Drawings from her department.

Deanna enjoys working in ISE Structures where, even after more than 20 years, she still learns something new every day. It is a fast-paced environment and aircraft operators need responses quickly. She excels at helping her team to constantly think outside of the box.

The mother of two amazing kids, Deanna feels lucky to be able to enjoy family life as well as a fulfilling professional career. She feels that more women should enter the aerospace field as they often provide a different perspective to problem solving, and also bring a unique focus and energy to their teams -- resulting in more positive results

Deanna is very proud to be working at De Havilland Canada and finds that just wearing a De Havilland Canada cap or T-shirt is often a starting point of conversation with strangers. In her words: “De Havilland Canada employees are very passionate and proud individuals, as our aircraft are extremely robust and capable of servicing areas of the world where other aircraft cannot and would not venture.“ She credits the “one team” attitude within the company with inspiring employees to work together to make the Dash 8 aircraft platform and support services best in class. 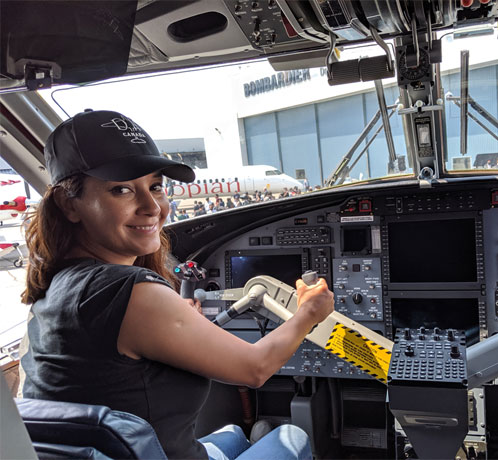 Mina Nourmansouri was born and raised in Tehran, Iran and moved to Canada when she was 12 years old. She followed her interest in math and science into the Engineering field. At McMaster University she chose the Materials Engineering field after attending a presentation by alumni students who had invented a new material, Aluminum foam. She subsequently focused on failure analysis of metallic components and that’s exactly what she does at De Havilland Canada.

Mina now has 12 years of experience in the field. On a daily basis, her laboratory work includes investigating broken parts and she presents her findings in reports that are used to take corrective actions. She also helps maintain parts manufacture procedures and carries out audits at our supplier facilities to ensure they meet De Havilland Canada’s specification requirements.

Mina enjoys acquiring knowledge thanks to her fellow Engineers at De Havilland Canada and feels that her expertise and knowledge are valued and sought after. For her, the best part is seeing our aircraft in flight.

As a woman working at De Havilland Canada, Mina’s experience has been very positive, having had coworkers and managers who have always supported her growth and provided her with great opportunities. Outside of work, Mina enjoys travelling and immersing herself into different activities like dancing, snowboarding, playing soccer and volleyball. 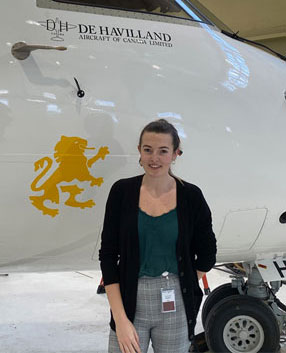 A first generation student, Lexi obtained her Master of Engineering, Aerospace Engineering in 2018 and has been working in the field for two and a half years.

Having always been fascinated about how airplanes worked and after learning more about aerospace engineering in high school, she knew it was exactly what she wanted to do.

Lexi currently works in the In-Service Engineering Systems group as a Hydro-Mechanical Specialist where her focus is on the Dash 8 aircraft’s ice and rain protection system, and windows. Recently, she has been tasked to be the focal for matters relating to aircraft storage due to the impacts of the COVID-19 pandemic.

She supports De Havilland Canada’s operators on a daily basis, on anything from technical queries to incident investigations to in-service modifications.

Lexi feels that the best thing about her job is her colleagues. Everyone has been extremely welcoming and supportive, and she has created some lifelong connections in the industry, while simultaneously increasing her knowledge of aircraft. Her job is ever-changing and never boring, making her career very fulfilling. She particularly enjoys watching engineering drawings come to life.

While in University, she was the captain of Ryerson Unmanned Aerial Vehicles (RUAV) and led the team to their first second place finish at the Unmanned Systems Canada Student Competition. This passion for drones never left and she is part of that competition’s committee.

Lexi would love to see more women in engineering because it is a collaborative industry that benefits greatly from diverse teams when designing a new product or solving a problem. She believes that as the number of women continues to increase in engineering, we will see a wave of new, unique solutions to existing industry problems. 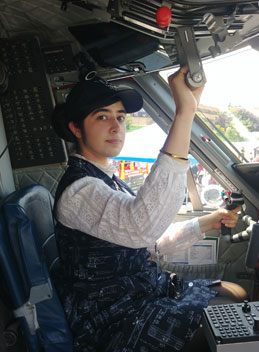 Armina was once told that she has aerospace in her blood. Her grandparents taught courses to engineers and both of her parents studied at the Moscow Aviation Institute. She was fascinated with space from a very young age and when she was young, considered a career in astronomy. Over time, she realized that engineering was more appealing to her and studied aerospace engineering in university.

At De Havilland Canada, she is part of the Flight Sciences group and her duties include ensuring the aeroelastic stability of all Dash 8 aircraft types. This involves reviewing proposed design modifications and running analyses, to ensure that the changes satisfy the stability criteria. She participates in ground testing as well as flight testing on the aircraft when new designs or significant changes are introduced.

Armina loves to travel and especially loves that feeling when the airplane leaves the ground -- when all the effort from different disciplines comes together to do what people would have once thought of as magic. She has been to 29 different countries, visited many airports, been on hundreds of flights and still experiences a thrill whenever she flies.

Armina is a history buff and loves to learn how we got to where we are today. She is also interested in learning new things and expanding her knowledge to help move us all to a brighter and better future, one that includes more women in aerospace, where they are still underrepresented. 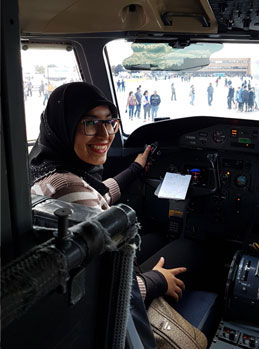 As far back as she can remember, Zehan always wanted to be an engineer. Taking things apart and building them was her hobby as a child. As her father was a pilot, she also always dreamt of flying.

When she was 14 years old, she saw a Career Day episode on PBS Kids which featured a woman Aerospace Engineer. She did her research and by the time she was 16, she knew her career path. After her third year at Ryerson University, she did a 16-month internship with Messier Dowty (currently Safran), then went on to obtain her Masters in Aerospace.

Zehan started working in Maintenance Engineering and is now an Analyst for the Aircraft Economics, Maintenance Data and Sales Support team at De Havilland Aircraft of Canada. She absolutely loves her job where she is excited to take on new projects and initiatives and make a difference using her skills. Not only does she love the projects she gets to work on, but she also enjoys the work environment. De Havilland Canada offers a diverse and inclusive environment where she loves meeting coworkers of various cultural backgrounds and learning more about them.

Eager to share her knowledge, Zehan also tutors girls from her community with high school math and sciences -- helping them improve their own skills and encouraging them to give the field of science and engineering a chance in the future. She believes that too many young women give up because they think they cannot succeed in a male-dominated field. She hopes that they will not let that intimidate them or stop them from doing what they love.

Zehan also hopes to travel to one new country each year and is a big fan of the outdoors and trying new activities -- like treetop trekking and ziplining.