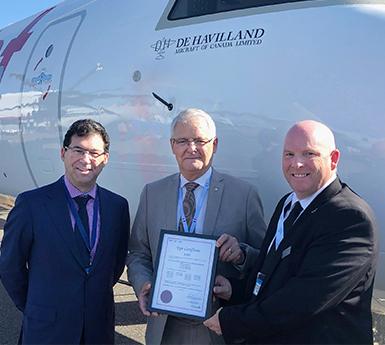 Paris, France --- The iconic De Havilland aviation brand is continuing its return to global prominence at the Paris Air Show.

In a ceremony at the event, De Havilland Aircraft of Canada Limited formally received the Type Certificates for the entire Dash 8 aircraft program, including the 100, 200 and 300 series and the in-production 400.

“We have great ambitions for the Dash 8 program and are excited to begin the next phase for this aircraft under a new company name that recalls some of the greatest innovations in aviation history. There have always been echoes of the De Havilland brand in the ‘DHC’ type names of many current aircraft, and we are pleased to re-energize the name and to re-introduce De Havilland Aircraft of Canada Limited as an operating company. We will be focusing on the cost competitiveness of these aircraft across the lifespan, from production to parts and in-service support. The heart of the Longview Aviation Capital business has been superior in-service support, and we intend to apply that expertise to this aircraft program. In the months ahead we will be investing in this part of the business, in our inventory operations and supply chain processes – all with the aim of positioning us to better serve our customers.”

“The Dash 8 turboprop program has momentum, including the introduction last fall of the new 90-seat configuration of the 400 series. The aircraft fits well into the fleets of operators seeking to capitalize on increasing regional demand, providing strong per-unit economics. There is a solid existing order book and we will continue to aggressively market the aircraft while working with current operators to ensure the in-service worldwide fleet performs effectively. Our team is delighted to become De Havilland Aircraft of Canada, and we look forward to writing the next chapter of this storied brand.”

Attending the Paris Air Show was the Honourable Navdeep Bains, Canada’s Minister of Innovation, Science and Economic Development. “Canada continues to punch above its weight in the global aerospace industry, and the return of De Havilland Aircraft of Canada as an operating company connects the dynamism of today’s industry to a rich heritage,” said Minister Bains. “I am pleased to see the continuation of the Dash 8’s legacy in Canada, congratulate Longview Aviation Capital for building such a significant Canadian aviation success, and look forward to the creation of more well-paid and highly-skilled jobs in this key sector of our economy.”

The Type Certificate ceremony follows the launch of De Havilland Aircraft of Canada Limited on June 3, 2019 with the completion of the transaction through which Longview Aviation Capital acquired the entire Dash 8 program including the 100, 200 and 300 series and the in-production 400 program. The Dash 8 joins Longview’s comprehensive portfolio of aircraft programs, including the Twin Otter program and the DHC-1 through DHC-7 series, as well as the former Canadair CL-215, CL-215T, and CL-415 waterbomber aircraft.

Longview Aviation Capital and De Havilland Aircraft Canada Limited are the result of the vision and determination of owners Sherry Brydson and Rob McDonald.

Note to editors: photos from the ceremony, as well as high resolution logo and brand files for De Havilland Aircraft of Canada are available at: www.DeHavilland.com.

Longview Aviation Capital is proud to reintroduce De Havilland Canada, one of Canada’s most iconic aircraft brands, with its acquisition of the Dash 8 program—including the 100, 200 and 300 series as well as the in-production 400 program.

Combining the Dash 8-400 aircraft with the existing Longview portfolio re-unites the entire De Havilland product line under the same banner for the first time in decades.

De Havilland first started in Canada in 1928 and with the design and production of the famous DHC-2 Beaver and the DHC-3 Otter, quickly established itself as one of the most accomplished aircraft designers and manufacturers in the world. The 75 year-old brand is synonymous globally with expertise, excellence and reliability, and is responsible for building some of the most renowned aircraft in aviation history.

Operating independently for the first time in decades, De Havilland Aircraft of Canada Limited will enhance the tradition of excellence surrounding the Dash 8-400 by continually evolving to meet the needs of customers around the world. At De Havilland we are proudly rooted in a rich history of constructing Canadian aircraft.

In addition to maintaining the Dash 8-400’s position as one of the world’s most important commercial aircraft, existing and potential customers of De Havilland can expect a focus on continued excellence in production, operations and servicing from Longview.

Longview Aviation Capital Corp. (LAC) was established in 2016 to manage a portfolio of long-term investments in the Canadian aerospace industry. In addition to De Havilland Aircraft of Canada Ltd., at present LAC includes and/or is associated with the assets of Viking Air Ltd., Pacific Sky Aviation Ltd, Longview Aviation Asset Management Inc. and Longview Aviation Services. 3 Through Pacific Sky, Longview also operates the world’s only certified Category “D” Full-Flight Simulator for the Series 400 Twin Otter, complete with seaplane simulation capabilities. Longview has a workforce of approximately 1,800 full-time employees in manufacturing and aircraft service support in locations across Canada, including Victoria, Calgary and Toronto.